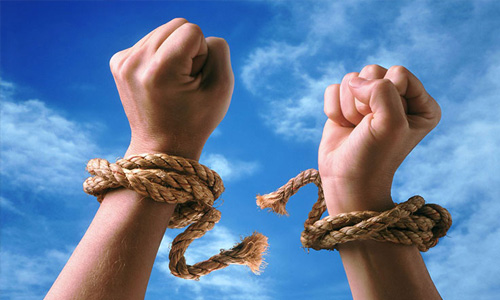 I was recently sitting and talking about deliverance with a young man named Robert. He’d been severely abused as a young boy. As we were chatting, Roberts head suddenly tilted sideways at a very strange angle and something glared ominously out of his eyes. I said “Excuse me, but Robert and I are talking.” The demons growled “Oh, would you like me to come back later?” We got the wound healed that allowed that demon to enter and cast it to the pit.

A couple hours later in Roberts deliverance session, at a crucial moment, just before sending a bunch of demons to the pit, Roberts cell phone rang, and it rang, and rang, and rang. Another demon looked at me and said “Well, aren’t you going to get that?” Of course he was just stalling and I soon sent him to the pit. . .but it did make me snicker.

Thirty eight year old Janet was in a group of about ten that took my deliverance training course. Janet volunteered to be ministered to during the class. She’d been molested by her father from the age of eighteen months till she was fifteen. She’d been raped at seven years old by an uncle.

Trauma at a young age many times creates a little multiple personality that carries the pain of the trauma. During ministry, a little seven year old child personality,(created during the rape), came up sobbing. I asked the Lord to come and speak to this seven year little girl, it sniffed “I’m not a little girl, I’m a seven year old boy!” This little boy was created because, during the rape, seven year old Janet thought, “If I was a boy, he wouldn’t do this to me.” I asked this little boy if he had a name, and he said his name was “Batman”, and I hold Janet’s fear, because Batman is fearless.”

I asked the Lord to come to Batman, take the fear, and speak to him about the fear. Batman said through his tears “Jesus, I cried out to you! Didn’t you hear me, didn’t you see me crying?” Jesus spoke to that little boy and told him. . .”I counted every tear.”

Upon hearing Jesus words, the little boy’s face(Janet) lit up with a grin from ear to ear. Everyone else in the room was in tears. Jesus took that little boy with Him when he left. I told him, “See you later Caped Crusader”, and he waved goodbye.